You are here: Homepage /  About us /  Profile of the ZBW /  History 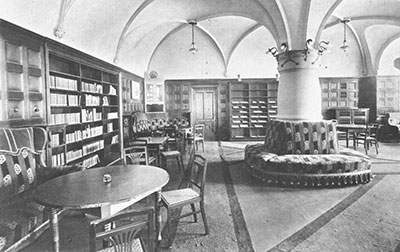 The library was permitted to keep its collections intact and to continue the procurement of foreign literature even under the National Socialist regime. During the Second World War, the books were removed from Kiel into the Cathedral of Ratzeburg. Thus the ZBW has suffered almost no losses to its stocks of economics literature.

In 1966, the German Research Foundation (DFG) designated the ZBW as the central library for economics in the Federal Republic of Germany. Since 1980 it has been a member of the Leibniz Association.

On the first of January, 2007, the library and the editorial office of the Hamburg Institute of International Economics were amalgamated with the ZBW. At the same time, the ZBW was incorporated as a foundation under public law independent of the Kiel Institute for the World Economy. Since then, the ZBW has been additionally known as the “Leibniz Information Centre for Economics”. In the same year, the ZBW was affiliated as an institute of the Christian-Albrecht University of Kiel.

In 2008, the ZBW was designated as a “Landmark” in the national “Land of Ideas” competition.

The ZBW has been honoured in 2008, 2012 and 2015 with the “Total E-Quality” award for its family-friendly policies in human resources and organisation.

In 2010, Professor Klaus Tochtermann was named as director of the ZBW. He is the first director who did not train as an economist. He also holds a chair in computer science at the University of Kiel. He heads the efforts to establish application-oriented research in computer and information science at the ZBW.

The EU project EEXCESS - "Enhancing Europe's eXchange in Cultural Educational and Scientific reSources" was approved in 2012. In this project, the ZBW joined with nine European partners to develop a new concept for information provision.

In 2013, the ZBW received the LIBER Award for Library Innovation for the third consecutive year.

In 2014, the ZBW was named “Library of the Year” by the German Library Association.

Since 2015, the ZBW has been in charge of the YES! Young Economic Summit, a student competition under the auspices of the Federal Ministry for Economic Affairs and Energy.

In 2016 the ZBW inaugurates the international INCONECSS conference and welcomes participants from 21 countries.

The interdisciplinary EU project MOVING started in 2016. It develops a training platform for digital information literacy. The scientific director is Professor Ansgar Scherp.

GeRDI – Generic Research Data Infrastructure, a project for the establishment of a linked infrastructure for research data, also started in 2016. The project is funded by the German Research Foundation. During the pilot phase, three data storage systems will be built in Dresden, Kiel and Munich, covering the domains of life sciences, marine sciences and economics.

In 2017, the ZBW addressed the issue of European and German research data infrastructures to make research data findable, accessible, interoperable und reusable, hence FAIR. The German support office of the GO-FAIR-Initiative is located at the ZBW in Hamburg. It coordinates activities at the European level and at national level in Germany.

In 2017, the student project YES! Young Economic Summit invites participants from other Länder for the first time.

In 2017, the Digital Preservation activities of the ZBW are certified as reliable and trustworthy with the Nestor seal.

The Science 2.0 Conference has been developed into the International Open Science Conference. More than 220 experts from 34 countries met in Berlin in 2017 to discuss the latest and future developments in Open Science.

Chronology of the ZBW [PDF]